For programmers, when we hear “Gang Of Four” we pretty much immediately conjure up an image of the blue and white book that most of us have sitting on a shelf somewhere in which four very smart people sat down and documented design patterns which would shape the way that people think about writing software for many years to come.  However, the concept a “Gang of N” is used frequently in politics the world round to denote a group of, at least somewhat like-minded people who form a voting block big enough to matter and thus wield a greater degree of power than any one of them could individually… Power which is often used to bring about significant changes rapidly.

The Powers that Be

Most developers have probably never heard of the W3C Technical Architecture Group, so if you haven’t, here it is in a nutshell:  This is a very small group of people at the W3C – a mere 9 people to be exact, chaired by Tim Berners-Lee himself – responsible for sort of envisioning the architecture of the Web itself and championing it.  I’m not sure exactly how much formal power they have, but in the very least it wields the power of the bully pulpit at the W3C and therefore to some significant extent over the actual focus that a lot of big groups drive toward.

The Need for Change

I will let you read more in the links below, but to sum up: Most of the stuff that this group has historically concerned itself with has little to do with the reality of some of the most important pieces of the Web platform that most of you reading this live and breathe every day.  If you want to think deep thoughts about how the Web is documents full of data interlinked through URIs – this is traditionally the group for you.  Don’t get me wrong – I’m not trying to trivialize it, but the Web is about so, so much more than this group has actively discussed and in my opinion this is creating a sad new reality where it seems that the importance and influence of the once proud W3C is less important to the everyday developer. If you now reference the WHAT-WG HTML Living Standard over the current W3C version, prefer JSON despite W3C’s enormous push of “technically superior” XML family of languages and tools and really want more focus on things that you actually deal with programmatically – then you see the problem.

One GIANT Chance to Make a Big Change

Only 5 of the 9 positions in that group are elected (Sir Tim is the chair and 3 positions are appointed – hmmm).  However, it just so happens that this time around 4 of those 5 spots are up for grabs… and somehow miraculously we managed to get 4 people officially nominated who could really shake things up!

If you don’t know who these guys are – I think you just aren’t paying a whole lot of attention…   They are smart, super active (dozens of influential working groups and important open source projects) and not the sort of guys who sit quietly and go along if they disagree.  A few of them have written some good articles about what they think is wrong with TAG now and what they plan to do if elected [1][2][3][4][5].

Basically – Make it concentrate more on the stuff you really care about:

Let’s Get These Guys Elected!

Here’s what you can’t do: Cast an actual vote.  Only the 383 member organizations of W3C actually get to vote – but they get to vote once for every open slot.

Here is what you can do:  Lobby…. Use the power of social media to promote this article saying HEY MEMBER ORGS — THESE FOUR ARE WHO WE WANT  YOU TO CAST YOUR VOTE FOR… Tweet… +1… Like… Blog… Make Memes…

C’mon interwebs – do what you do so well… 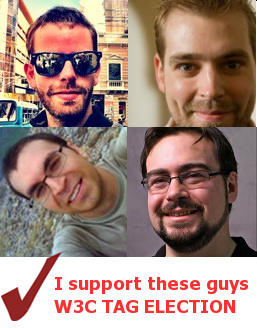 6 thoughts on “The New Gang Of Four”